If you are a sports lover, you will love Kissamos Gorges. Exceptional beauty and virgin places that are worth the visit. We organize hiking programms in the most popular gorges in Kissamos and Chania with breathtaking natural beauty. 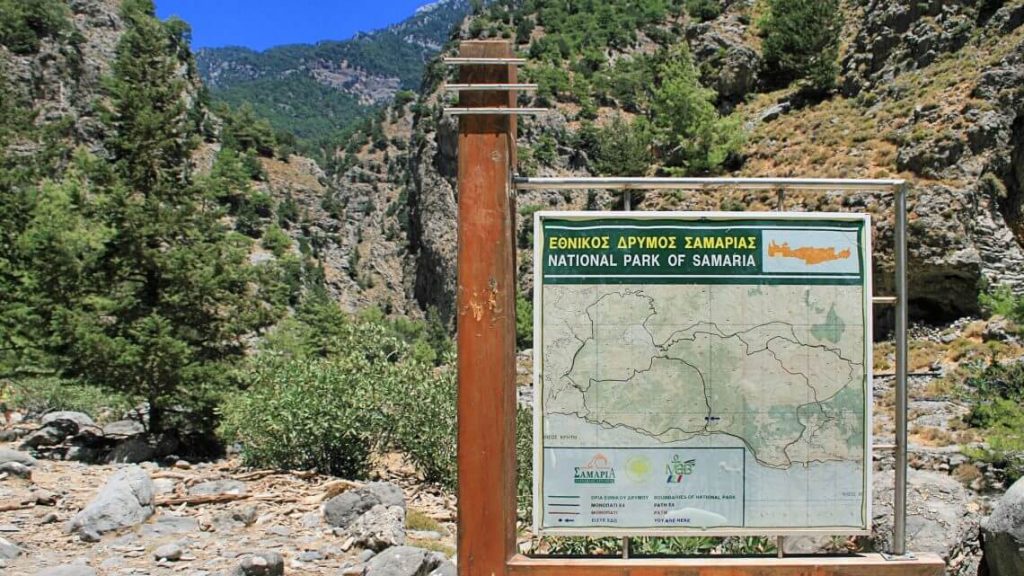 Samaria Gorge is one of the most famous hiking canyons in Greece and Europe and belongs to the European E4 Trail. It is located on the south side of the prefecture of Chania. It starts from Omalos and reaches Agia Roumeli, with a length of about 15km. Its downhill is 6-7 hours, but it depends on your pace.

The imposing Doors (or Iron Doors) can be found at its narrowest point with a width of 3 meters, where exactly the height of the walls exceeds 100m, somewhat near 300m and farther than 700m. The passage is considered the most impressive element of the route, but dangerous early morning and evening hours in summer (all winter) with landslides due to abrupt temperature changes and kri-kris crossing on the rocks for food.

It was proclaimed in 1962, being one of the first National Parks in the country. It hosts many endemic species of birds and animals, the best known of which is the Cretan goat, known as the kri-kri or agrimi. Since 1981 it has been part of the UNESCO World Network of Biosphere Reserves (MAB: Man & Biosphere)  with the aim of highlighting and protecting valuable sites for humans and the rest of the biosphere. 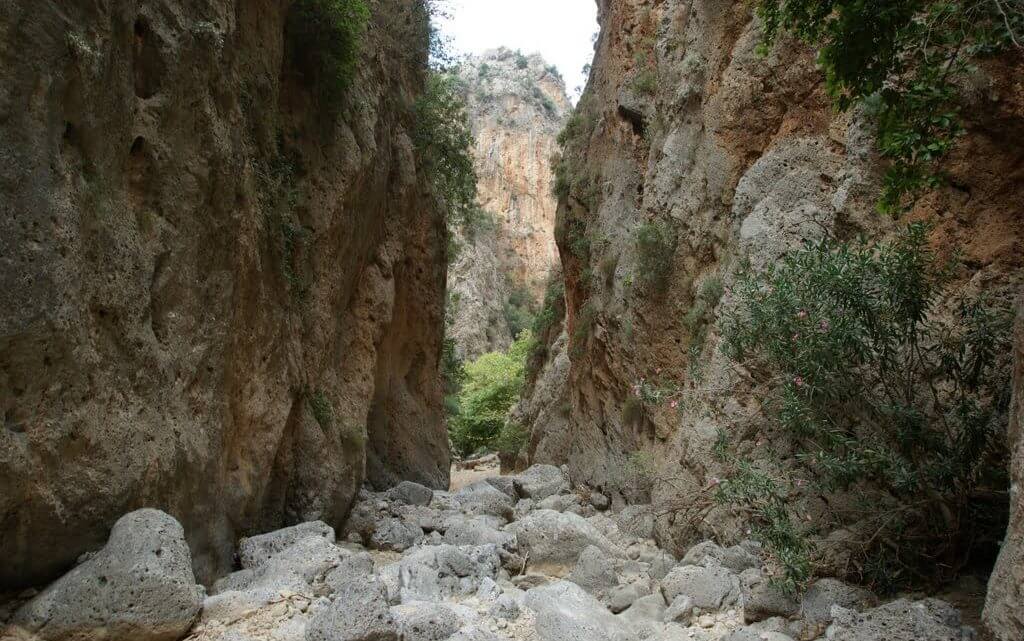 Rokka Gorge is located 32km west of Chania, in Kissamos province. The 2km-long canyon starts near the village of Deliana and ends at the Mesonisi location north of the village of Rokas. The canyon passes east of the Trulli hill where ruins of the Byzantine fortress of Rocca are preserved. It is a continuation of the Gorge of Mesavilia – Deliani and the river flowing through it ends at Nopigia beach. Hiking through the canyon is of medium difficulty and takes about 2 hours, depending on your pace. 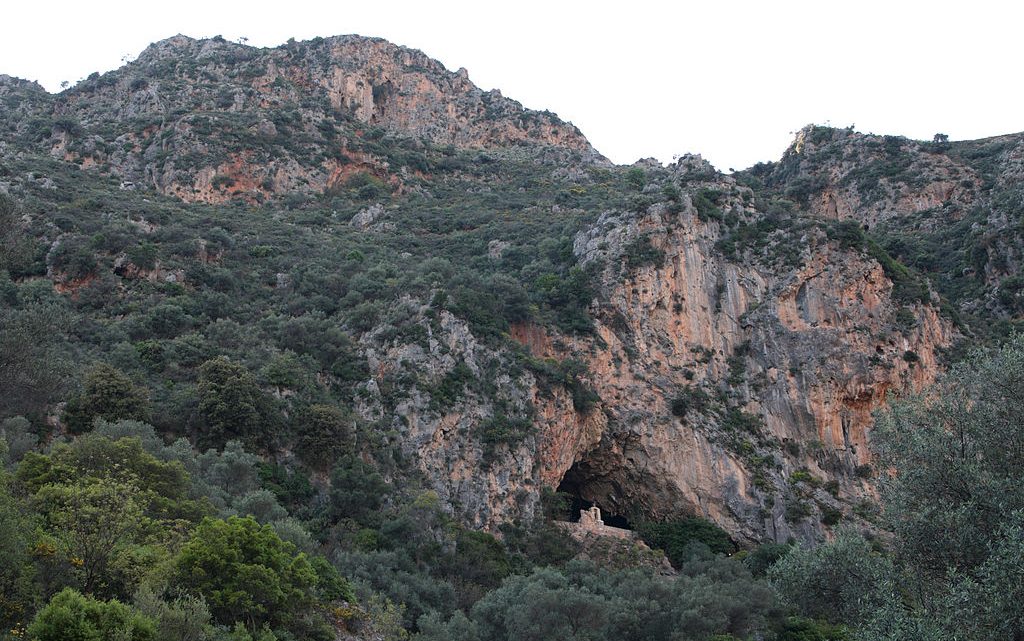 The Topolia Gorge is located in western Crete and along the road leads to the Elafonisi area. Its main hiking trail forms a small part of the actual length of the gorge and essentially begins near the village of Katsomatados, at an altitude of about 250m, and stops at the stone-built Marathokamara below the village of Topolia, at an altitude of 150m. In this narrower and more impressive part of the canyon the rocks are vertical and tall. Crossing the gorge is the river Tiflos, which flows from Mount Dikaeos to Elos and carries its waters into the gulf of Kissamos.
Near the beginning of the trail it is worth visiting the cave of Agia Sophia, located above the main road. 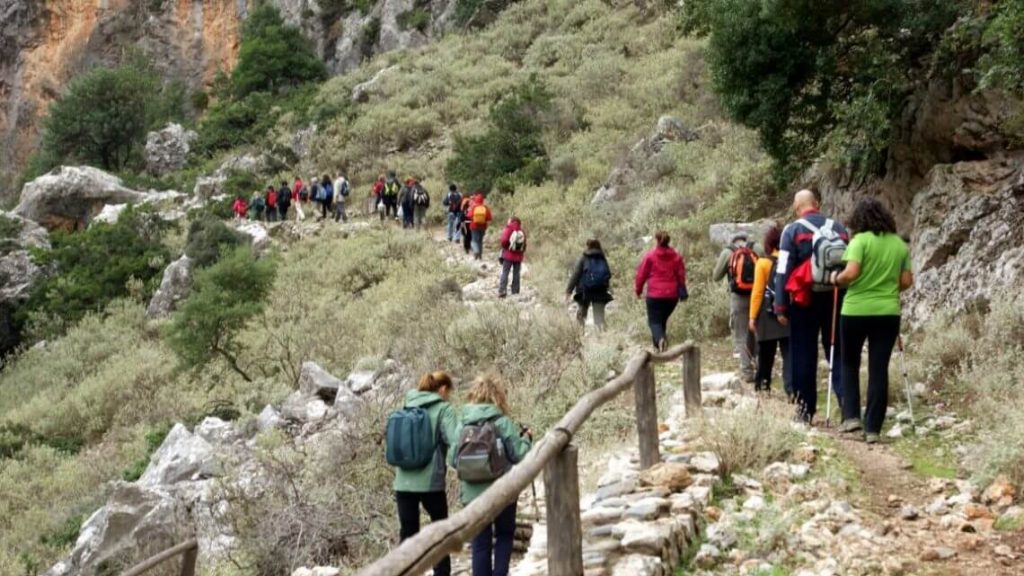 Sirikari is located 55 km west of Chania and 17 km south of Kissamos, in a lush area with gorges and running waters. Just a car ride there will convince you of the beauty of the area.

From here essentially begin the two parallel gorges of Sirikari (Tsichlianos to the west and Kielianos or Sirikarianos to the east) that terminate in the village of Polyrrinia, where ancient Polyrrinia was built. The ancient walls of the city are preserved in pretty good condition in its citadel, In Sirikari a stunning forest is formed with spectacular chestnut trees, small waterfalls and running streams. It is not the only chestnut forest in Chania, as there are many around the cool slopes of the Kissamos Mountains.

However, it is one of the nicest and it is quite large, on a high hill overlooking Kissamos Bay. 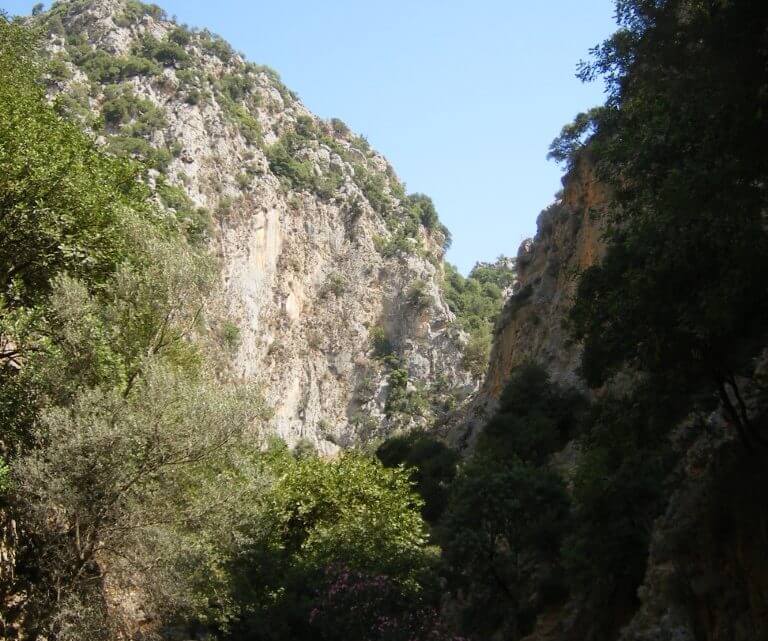 The gorge of Therissos or Eleftherios Venizelos is located near the city of Chania and is accessible all the way by car. The main gorge is 6 km long, while its flowing Kladisos River carries water from the White Mountains to the beach of Nea Chora. Its vertically imposing rocky slopes and verdant vegetation have nothing to envy from the rest of the great canyons of Crete. A visit to this is combined with a stroll in the village of Therissos at the beginning of the canyon, which is built at an altitude of 580m. 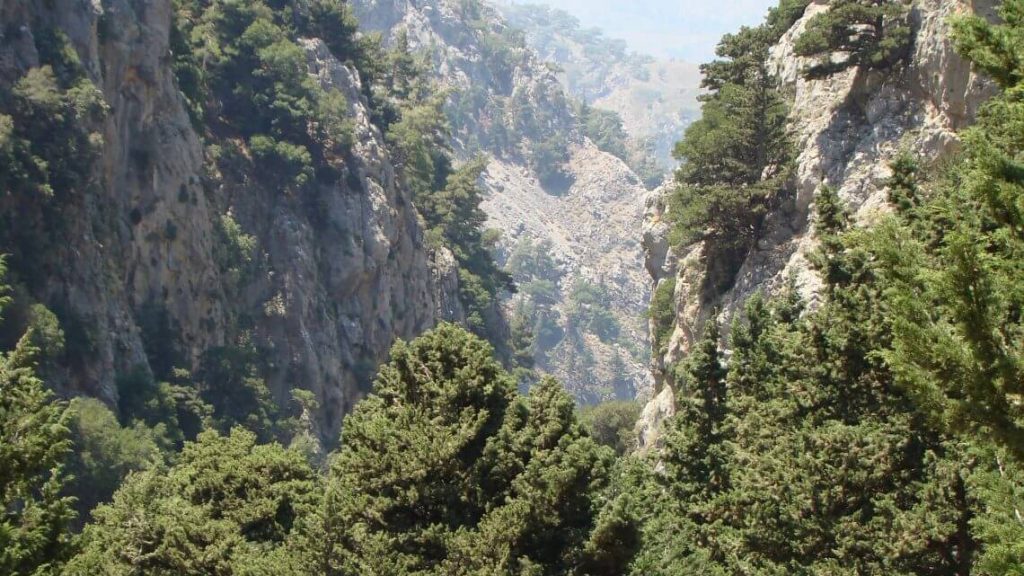 Agia Eirini Gorge is located on the west side of the White Mountains, in the province of Selino. It derives its name from the village near the entrance, 46 km from Chania. Its length is 7.50 km and its journey takes about three hours. The stream crossing the canyon ends at the sea, in the village of Sougia with its beautiful beach, where you can enjoy an unforgettable swim in the waters of the Southern Cretan Sea.

The canyon is part of the E4 European Trail. The southern entrance is 5 km from Sougia. It is part of the NATURA 2000 area and has been designated as a Wildlife Refuge by the Ministry of Agriculture. The canyon is part of the Cretan Goat’s habitat and is characterized by a variety of micro-environments that are a refuge and habitat for many species of fauna. The richness of forest vegetation is characteristic both in terms of trees (cypress, tropical pine, maple, plane tree, holly, aria) but also of shrubs, phrygans and aromatic plants with predominantly dicotyledon. 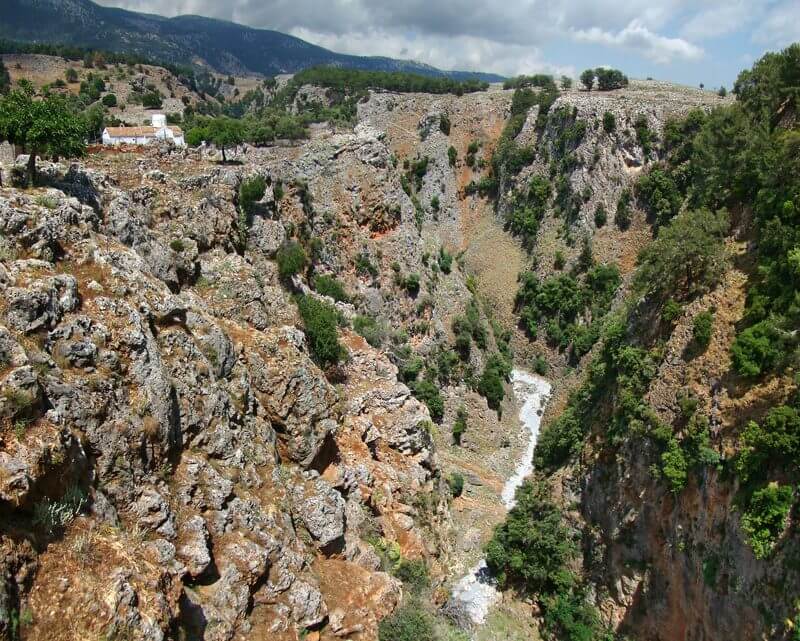 It is one of the most interesting and largest canyons of Crete. While most think it is only 7km long, as everyone begins their journey from the village of Aradaina, about halfway through the canyon, the actual length is 15km. In fact, the gorge actually starts from the underground river of the Drakolaki cave, at the roots of the Thodoris peak of the White Mountains.

Aradaina is the deepest and one of the steepest canyons in the Prefecture of Chania. With a wall height of over 150m the canyon is ideal not only for hiking but also for bunjee jumping from the Aradena Bridge. The enchanting route through the canyon to the exit at Marmara Beach is an unforgettable experience for anyone attempting to descend the canyon. In some places large rocks are difficult for hiking, while stairs are set in difficult passages.

In the village of Aradaina, you will find the metal bridge that is the tallest in Greece (138m high) and the second tallest bungee jumping bridge in Europe.

The Sfakia Gorge flows 2 km east of Sfakia. It starts at Trikoukia at an altitude of 1200 meters and its stream ends in the Caves of the Prisons in the South Cretan Sea. The canyon is 6.5km long and generally easy to access. The proposed hike through the canyon starts from the Niatou Plateau (near Askyfou) and leads to the abandoned village of Kaloi Lakki. Right before this village, the gorge, which is one of the most important canyons for flora observation in Crete, begins. Spears, cypresses and pines are the main trees of the Sfakia Gorge.

At the beginning of the gorge there is the church of Apostle Paul, which was created by the inhabitants of Chora Sfakion in 1407. Near its exit at Porolago, the gorge meets the road leading to Chora Sfakion. But it is worthwhile to continue your journey to the shore, as the gorge ends in the beautiful Fjord 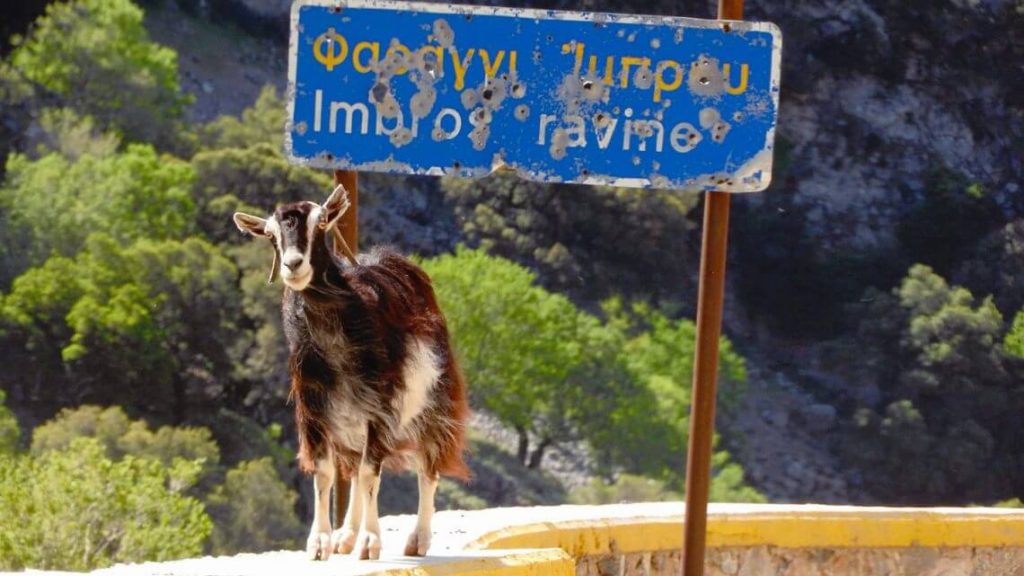 Imbros Gorge is an 11 km long canyon located near Hora Sfakion in southern Crete, the Mediterranean island. It runs parallel to Samariá Gorge, its narrowest part has 1.60 m and it ends at the village of Kommitádes (8 km/ 650 m for hiking). The Imbros village (aka Nimbros) is located at an altitude of 780 meters and is at the South end of the fertile plain of Askyfou.

The legend tells that two brothers were banished from Imbros, Turkey and lived in the Imbros village, Crete.

The Imbros Gorge mule trail was the only connection between Chania and Hora Sfakion, before the road was built. Remains of this trail can be still seen. The gorge witnessed an evacuation of several thousands of British soldiers during World War II before heading to Egypt.

You can pass the gorge all year round except when it’s raining or snowing heavily.

For those who reach Imbros with their own car, they can leave it there, pass the gorge and return to it with a taxi from Kommitádes or walk through the gorge all the way back again, as it is not so tiring.

As one walks downhill 8 km and 650 m, it is something like half of Samariá Gorge. But Samaria Gorge is above the river bed and Imbros Gorge is round scree of the dry creek bed. The Imbros Gorge is strenuous, proper shoes with ankle support should be worn.

Contact us for more information
Reserve a room now and spend the most wonderful time in Kissamos during your vacation.
CONTACT US
BOOK NOW